The main editor window of WakingApp AR Studio is composed of several elements, and may be rearranged to fit your workflow.
The following pages contain detailed information about the different sections of the Editor, as indicated by the numbers in the image above.

The Main Menu Bar and its various Menus provide functionality that is not immediately apparent or intuitive, such as handling with the Project itself, creating primitive scene Objects, etc.
The various menus and their specific functionality are detailed below:

This menu provides controls for handling Projects and their Scenes.
Through the Export sub-menu, the currently loaded Project may be uploaded to the cloud for distribution via a WakingApp Publish Server, or packaged into a file on the local machine for direct distribution.
The File Menu functions are:

Creates a new Project file and its associated directories at the designated location (if no project already exists within that directory). After creation is completed, the new Project will automatically be loaded (unloading the currently loaded project, if needed).

Load an existing Project from the designated directory on the local machine. This function will unload the currently loaded project if needed.

Saves any changes made in the currently loaded Scene into the associated Scene File on the disk. If no Scene File is associated yet (such is the case with the first Scene created with a new Project, or creating a New Scene via the New Scene action), a prompt will appear asking where to save the Scene File.

Saves the currently loaded Scene into a new File, regardless if it has an associated Scene File or not.

Load a Scene from the disk, replacing the currently loaded Scene if needed. 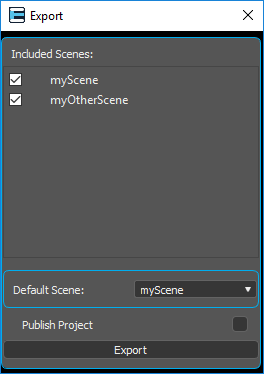 Choosing either export option will lead to the export window.
The export window lets you which scene's should be contained within the exported project, with one scene being set as the default scene (will be loaded automatically once the project is loaded).
The "publish project" checkbox determines whether the project should be published or not.
Publishing a project updates its live version, updating it for anyone with access to the project. The project will also be available in the WakingApp AR Studio application's search feature.
Choosing not to publish the project will generate a direct-link QR which may be scanned to test the project locally, without exposing anyone to the changes made.

The Project Menu allows the changing of Project settings.
The Tracking Type sub-menu provides control over the Project tracking behavior when running in the application environment:

Requires the end-user to continuously scan the designated image. This image is treated as the reference point for the Project, and all Scene objects will be positioned relative to this image.

Treats a real-world point as the Project reference point, and all Scene Objects will be positioned relative to this point in space.

This menu provides means of handling Assets.
The different functions are:

Opens a browser window so the user can select new Assets to import into the project. The selected Assets will be copied into the project’s raw assets directory root, after which they will be automatically imported by the Editor.

Creates a new, empty directory, at the root of the project’s raw assets directory.

Creates a new Material Asset with default values for use with Scene Objects.

This problem-solving functionality forces the Editor to import all the assets within the project’s raw assets directory again, overwriting the existing compiled assets.

This function is used mainly for asset repair, and may take a long time to complete.

This Menu provides context-sensitive functionality, more directly dealing with Project items such as Scene Objects or Assets.
The various functions and the items affected by invoking them are:

Reverse the previous Action performed by the user (displayed in the Action History view). Only Actions performed on Scene Objects may be undone.

Perform the next Action performed by the user (displayed in the Action History view). Only Actions performed on Scene Objects may be redone.

Select either all of the Scene Objects or all the Assets.

Changes the name of the selected Scene Object or Asset.

Copies the selected Scene Objects onto the clipboard for later pasting.

Pastes the Scene Objects currently on the clipboard. This action may be performed multiple times, as long as there are any Scene Objects selected.

Equivalent to performing Copy and immediate Paste operations, this action will duplicate the currently selected objects without copying them onto the clipboard.

This action sets the Target Image of the project, provided that the Project's Tracking Type is set to Image Tracking.

Provides the means to set up an environment image that will be reflected from metallic surfaces in the Scene to give them more realistic appearance. It is required for PBR materials to appear correctly.

The Account Menu provides means of accessing functionality relevant to the signed-in developer, including account and project management.

The buttons on the Toolbar provide control over certain aspects of the Editing experience: 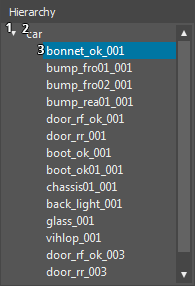 The Hierarchy View displays all the Objects that exist in the currently loaded Scene, in a tree format reflecting their Hierarchy.
Objects may be dragged under other objects to change their parent-child relationship.
The details of these Objects is divided into 3 parts:

Selected Objects may be deleted by pressing the ‘Delete’ keyboard button, or by using the Delete command under the Edit Menu. 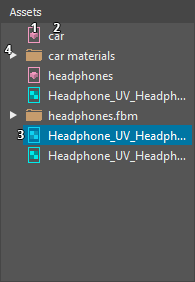 The Assets View displays the folders and files that can be used in the project, in the same structure of the “raw” project sub-directory. Only folders and legal asset files are shown in the Assets View.
The information is divided into 4 parts:

1. Icon indicating the type of the Asset - or the status of the Folder. The different Icons and their corresponding types are:

2. The name of the Asset or Folder.
3. Selection indicator.
4. Folder status indicator - Expanded or Collapsed.

Folders may be created either through the Operating System,
or via the Assets Menu using the Create Folder command.

Assets may be dragged into folders for organization.
Selected Assets and Folders may be deleted by pressing the ‘Delete’ keyboard button, or by using the Delete command under the Edit Menu.

The Editor Console displays system messages according to actions taken in the Editor. The console is not interactable, but text may be selected for copying into other applications. The messages are color-coded to indicate severity, where white is a normal message, yellow is a warning, and red is an error.

The Action History View displays a list of all the actions performed in the Editor since the project was opened.
The information on each action is divided into 2 parts:

The Current Action Indicator will usually point at the latest action performed, but by undoing or redoing actions, it will move to display the latest actual action performed.
Clicking on an Action in this view will immediately ‘travel’ to that action by undoing or redoing all the actions after or before it, respectively.
The Action History View can also be popped out of the Editor, or be closed entirely.

1. Component name.
2. Property name.
3. Sub-Property name, for Properties that are actually a composite of other Properties, e.g. the Position Property is composed of a different Value Property for each of its axes (X, Y, and Z).
4. The editable field of that Property. There are several types of Properties, each with its corresponding editable UI control.
5. The special Add Component button is always displayed on a selected Object, and is used to add more Components to that Object. 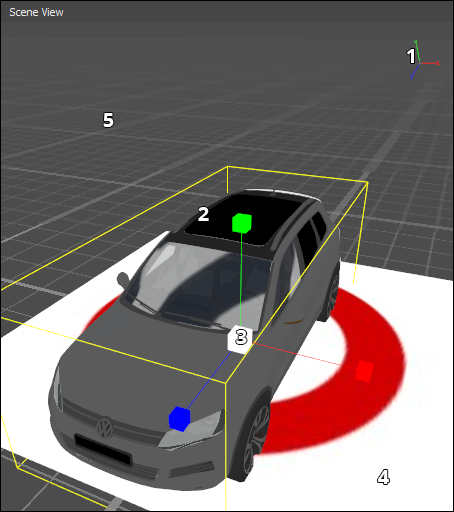 The Scene View is the main editing area of WakingApp AR Studio, allowing visual editing of complex scenes and experiences.
The different items visible in the Scene View are:

1. Camera Orientation - this item mirrors the orientation of the Scene Camera, to show where it’s pointing relative to the world orientation.
2. Object - an example of how a 3D Model Object looks like in the Scene.
3. Gizmo - an interactive visual aid for manipulating the Transformation properties of Objects in the Scene (Position, Rotation, and Scale)
4. Target Image Preview - displays the Target Image in relevant Projects for easier placement and orientation of Objects relative to the tracked image.
5. World Grid - provides a visual anchor and relative coordinates to help with Object placement and get a sense of Object scale relative to the world.

Dragging & dropping 3D models from the Assets panel onto the Scene view will add them to the scene.

You can navigate within the Scene view by holding the right mouse button and using W,A,S,D keys to move forward, backwards & to the sides and E,Q keys to move up and down.

In order to present the positioning gizmo, select an object first, then press the 'W' key.

In order to present the rotation gizmo, select an object first, then press the 'E' key.

In order to present the scale gizmo, select an object first, then press the 'R' key.

An additional UI-Preview layout appears on top of the scene view for scenes containing UI elements. 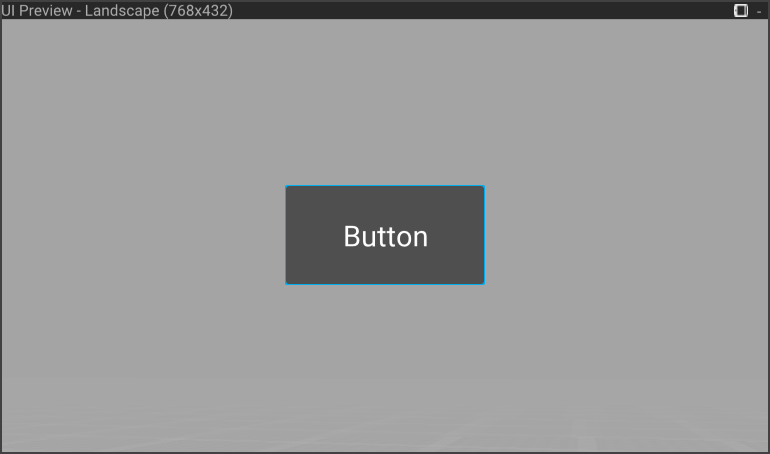 The UI preview lets you preview the layout of all the current scene's 2D UI elements. The UI Preview is a window with a set 16:9 resolution (768x432), with toggling between portrait and landscape modes enabled.

When adding 2D UI elements to your project, you must place them on the layout with accordance to the given resolution. Once the project is loaded on a mobile-device, all 2D UI elements will automatically be scaled to the device's resolution, while maintaining aspect ratio.
For example, a button created with a height of 43pixels will cover approximately 10% of the screen's height. should that project be loaded on a mobile device whose screen resolution is 1280x720 - the button's actual pixel height will be approximately 72.

Updated over 2 years ago